In early 2006, we were invited to participate in a four-week, international, collaborative urban design competition by Cairo-based developers to master plan and develop architecture for a 250-acre portion of an eventual 8,300-acre ‘city’ in the desert east of Cairo. Due to the growing demand for housing, the competition posed a legitimate question: How do we translate the essence of present-day urbanized Cairo into a barren desert environment? As the site offered no obvious guiding idiosyncrasies and the application of abstract geometric patterns could never equal the complexity we found so admirable in Cairo, we were left with a question of our own: When working within arbitrary boundaries on a nearly featureless site, how do you create an urban environment that is not itself arbitrary? They are barely recognizable in all but aerial views, but natural drainage channels, or “wadis”, crisscross the desert and only become obvious after heavy rain. These wadis proved to be the necessary catalyst for the generation of a site specific urban pattern and spatial parti. Nonetheless, the wadi-driven patterns did not alone sponsor urbanism. By overlaying the wadi patterns with a network of secondary, more defined spaces and coordinating housing placement based on market-driven zoning per unit type, we produced street and space typologies that approach the spontaneous variety of experiences that established cities offer. 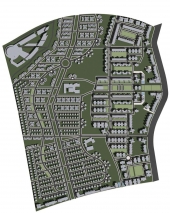