The Roy E. Kelly Multimodal Center project is located in downtown Bryan, two blocks east of Main Street. This new transit facility accommodates 600 cars with future phasing of an additional 300 cars, as well as a small bus terminal, 20,000 sf of new offices for the Brazos County Community Supervision, and a 10,000 sf retail component. The aesthetic of the project conforms to the City of Bryan’s streetscape design requirements as implemented on the newly renovated Historic Main Street of downtown.

This project demonstrates that certain goals (conceived at the level of urban planning) can turn a single building into an urban design project without any increase in scale.

Urban design strategies that can be applied include context driven moves related to fitting the building into the established master plan and the incorporation of forms that index the existing conditions on Main Street into the shape of the new facility.

While the building can not expand beyond its designated site, its influence on areas beyond its site invite urban decisions to shape the building. The combined effect of these urban level moves dictates much of the buildings form and organization. Meanwhile, genuinely architectural operations such as materiality and space planning continuously occur, fleshing out the edges and zones that existed only as a diagram prior to their application. Circulation, both horizontal and vertical, is another important architectural consideration in fulfilling the urban demands due to its governance of people, the single most critical component of urbanity, and their movement through and introduction into spaces. 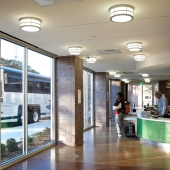 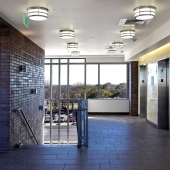