The monument’s goal is to balance the accessible imagery of the flag panel with the emotive and ineffable experience inside the tower and in so doing honoring a diverse constituency of individuals who made the sacrifice to serve and who come to recall those that paid the ultimate price for doing so. The experience is established by two major architectural components set in juxtaposition; one celebratory, the other contemplative. The power of the monument, its ability to evoke a meaningful and touching effect on all visitors, is driven by the strong contrast between these two ideas. The celebratory aspect of the monument experience is embodied in the Flag Panel, an abstract but identifiable flag carefully accented with blue tile and red concrete stain. The panel itself is flag-shaped and utilizes a structural flag panel to allow a cantilever creating an open gateway effect that is anchored in the lake. The intent is to create an emotional effect of crossing from the profane to the sacred. The tower that is placed directly in the path of the Flag panel gateway is deliberately ambiguous in its form, contrasting with the simple analogy of the flag panel. Its verticality obviously counter poses the horizontal boundary defining gateway of the flag panel. The tower is comprised of wall panels huddled together on the island site. They sit within a pentagon-shaped form which along with the five huddled wall panels symbolize the five branches of the military. The width of each panel at the base varies to reflect the relative size of enrollment in each branch but resolve to a similar width at the top where they form an oculus. As its form is meant to evoke a visceral sense of remembrance, the slightly brooding form and materials are activated by contrasting sunlight. The entry into the tower symbolically faces west, where the day ends and allows the visitor to face east towards a new beginning. Inside a tapered view of the sky anchors the eastern oriented light slot. Throughout the day a sunbeam traverses over the internal faces of the panels, awakening with light the names of the fallen inscribed on the internal panel faces. The tactile senses are engaged as the rustication at the base of the internal patterns progresses from rough to smooth symbolizing the progress from chaos to calm war promises. 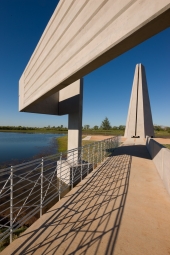 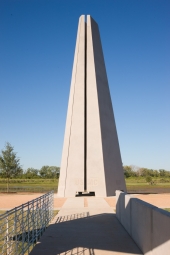