This project proposes a new field house with a 200 meter track, meeting facilities, weight rooms and health club amenities. The building will be located across South College Street – the traditional dividing line between campus and the Town of Washington, Pennsylvania – it is the first Town/Gown project in which the growing campus integrates closely into the established urban fabric. Located at the corner of South College and East Chestnut, the project will define the extension of an on-campus pedestrian circulation route, called Pine Alley across South College on the south side of the new facility and will terminate in a “shovel ready” stimulus funded local transit stop and terminal. This alone suffices to knit the campus building seamlessly into the urban building pattern, yet maintain an allegiance to the campus structure and logic.

The 75,000 sf building is by program a large footprint structure and takes advantage of the steeply sloping grades to allow some program to be tucked away on grade at South College Street in order to minimize scale. The upper level contains the track and its event driven required volume enveloped in a skin that allows some natural light at strategic points above. The entry off of Pine Alley includes an urban gesture of a grand staircase for access to the upper level through a visitor and lobby area as well as a traditional core. The fitness facility can be accessed at the lower level from the street or through the main core area.

The architecture of the building interprets the large footprint as a smaller series of volumes each articulating a program element related to function or to quality – the skylights, for example. The purpose of the interlocking forms is to mitigate the scale of the building while not impinging upon its function. The goal is to portray a state of the art facility in a manner respectful of its urban context. 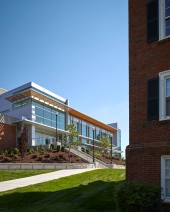 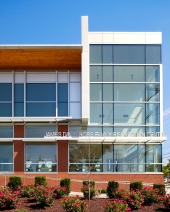 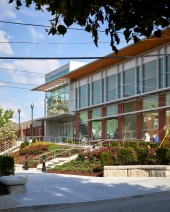