Arabella is a 34-story 99 unit for purchase residential tower in Houston, Texas.

It is located on a prominent corner on the edge the high net worth zip code or neighborhood of River Oaks. As it is on the seam between an established enclave and an upcoming commercial zone, several other residential and mixed-use facilities are currently underway in the vicinity of the site.

The task, as described by our client was to create something ‘iconic’. The task as understood by us was to find a way to differentiate our project from the nearby new and ongoing competitors. We approached the problem as one of strategy rather than as a beauty pageant of ever more features. That is how we thought we could make it iconic.

We began the process by looking at regional and international trends in high rise residential and noticed a certain pattern forming –take as little land as possible multiply it within a simple extruded footprint, make a cool top. A kind of amenitized repetition. Like a bland subdivision of tract homes with an amped up club house and pool near the entrance. Sort of verticalized subdivision blight….

Acting against this repetitiveness, the tower is conceived as an ensemble individually designed custom houses, not only all unique, but also identifiable within a vertical neighborhood. Local construction methods and structural restraints allowed for cantilevering of the building slab to create balconies protruding from living spaces. As a reversal of this logic, living spaces are projected from the façade with terraces inboard. A living room with three sides of exterior views could sponsor a terrace for a unit above and shading for a terrace below. But the repetition of our competitors had an advantage in COST. We needed some kind of camouflaged repetition- a programmed differentiation of sorts. So we began to rotate the floorplates about the core creating what we deemed; the ‘CAMSHAFT effect’. Whereas the positioning and rotation of each cam in an engine is of critical importance it is also indexed to an asymmetrical pattern of repetition set by the limited number of cylinders. For us, each shift in the floor plate became specific to the living spaces within.

Designed from the outside – in, there are no typical floorplates. Instead, 99 unique homes of varying size and program are offered throughout a vertical neighborhood. Arabella won the 2019 Houston Business Journal Landmark Award for Multifamily. 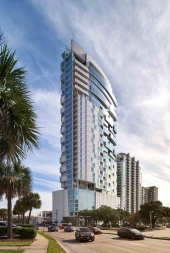 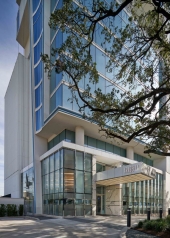 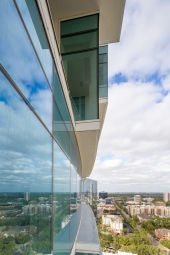 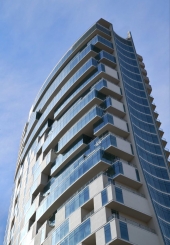 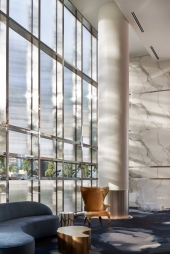 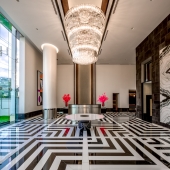