Wallis State Bank’s site, at five acres and located some 10 miles from the Central Business District, might be considered suburban, but it is closer to the actual demographic center of Houston, just a mile south and it is activated by its frontage on the second of now four loops or ring roads that organize Houston’s 624-square mile territory. Thus it is also quite urban and the clients expectations of what goes on it (program) and how it is organized (form) have more in common with an infill site than a greenfield one. The site is master planned for four structures, the bank and administrative facility, a future lease building, a parking garage and a water detention facility (evidence that despite all it is an ex urban site). The first phase is a 19,000 square foot floor plate office and bank function. This 3-story building also has an executive 4th floor at 5,000 square feet for a total of 65,000 square feet. It occupies the hard corner and is positioned to have favorable views from the executive level, not to be blocked by the second phase 6-story building (and guarded from the views in by a mesh fin), with the garage at the “back” of the site as it were, buffering the next tier in sites dominated by warehouses. 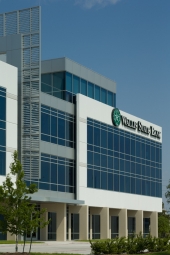