PetrolValves, an Italian-based manufacturer and distributor of large valves, purchased a property on a major tollway, adjacent to one of the busiest toll plazas in support of establishing / emphasizing their USA presence. The challenge of this site became the simultaneous expression and suppression of the site’s exposure to a major thoroughfare. This facility houses their USA personnel as well as accommodating adequate storage and service of the product. We wanted to recognize this front-of-house / back-of-house duality while providing an overall organizing strategy. A system of slot-like windows were punched into the wall to convey the openness of the service areas and were transformed into positive solid panels glazed in the curtain wall at the main façade to allow light into these spaces. An obelisk-like tower operates at the scale of the freeway with views from almost one half-mile away yet sufficiently separating the signage from overwhelming the architecture. The modest interior areas are set up placing the major public areas along the southern exposure behind a deep shading canopy with the major group work area behind, taking advantage of a two story expanse of high performing curtain wall glazing. 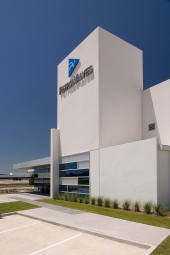 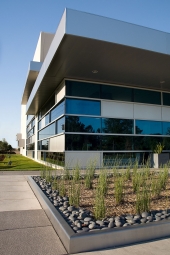 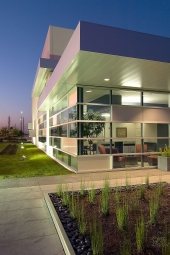