As a lead supplier of industrial computers servicing the government, aviation and oil field industries, this facility is designed to reflect the company’s ongoing pursuit to compete and be the world leader in their respective markets. From this modern facility, Laversab will command a worldwide channel of sales representatives and distributors reaching a wide variety of scientific, government and industrial markets, including a current customer base of over 50 Fortune 500 companies. Since the company is new, an extensive programming exercise was done looking at growth over two, three and five years. The owner chose to utilize the five year plan. The design challenge was to mediate between the high tech nature of Laversab’s company with the low tech construction type of the typical office / warehouse building’s ubiquitous to the industrial park it is sited in. The overriding compositional strategy is manifest in a concrete screen wall with the internal building programs attached behind it. Rather than fully masking the building from the street, we allowed the screen wall to be affected by the functions behind it – vertical fins with horizontal reveals that continue through the main corridor of the office space announce entrance. Curtain wall with an aluminum sunshade slips through the screen at the buildings public areas and an abstract set of apertures punched into the horizontal reveal pattern index the kinetic character of the manufacturing spaces. Adjusting to the contour of the street frontage, the slight curve in the screen wall allows the building to seat itself into the site. 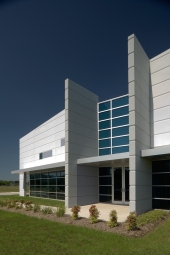 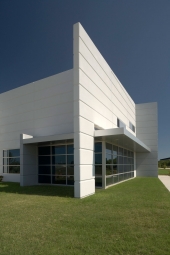