Having sold their business, and in turn the building we only four years before had designed for them near the airport, our client approached us a second time with a unique desire. The Pinch Group is essentially a trucking logistics operation involving just-in-time trucking delivery. The owners, a father and three sons, wanted the reverse of the current trend of work at home; they didn’t actually want to BE at home but rather to feel at home. And what held together their common vision for achieving this was an affinity for the environments of TV’s “Mad Men”.

We catalyzed this notion by introducing them to the Case Study Houses, Google Architecture and roadside period architectures. We did so in the framework of accepting their desires somewhat literally and accepting our own interests in the role of creativity over the insane idea of constant ongoing originality or invention that architecture perpetuates. We took comfort in the notion of architect as bricoleur- working in a collage-like manner to transform seemingly known things through displacement- the cubist method for producing new meaning out of supposedly known material. It was exhilarating to test how closely we could emulate images or spaces altering only materials while also transforming strategies from some of the source material we were inspired by to near obliteration. We tried to balance a feeling of transformation with the preservation of something essential in each vein of influence while weaving something new out of the effort. 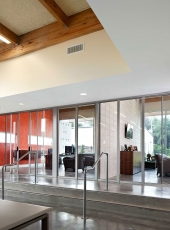 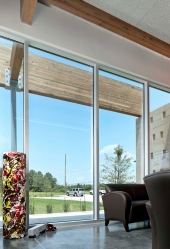