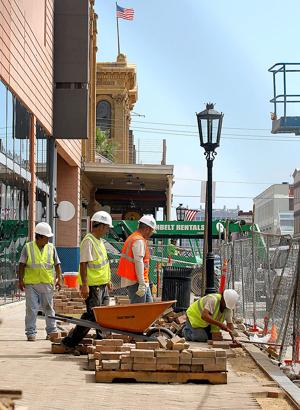 Construction of a transit terminal that will add 159 parking spaces and fresh retail to the island’s downtown could be complete by mid-November, a year later than originally planned, port officials said.

Next month, Port Director Michael Mierzwa is expected to present several leases to the port’s governing board that would allow a restaurant, a specialty convenience store and possibly an art gallery to move into the bottom floor of what will be called the Galveston Transit Terminal underway on the northeast corner of The Strand and 25th Street. Mierzwa declined Monday to divulge the names of the restaurant and retail tenants, saying only that the convenience store would cater to passengers and crews of cruise ships, as well as downtown residents. The retail shops likely won’t be open until December.

The $6.3 million transit terminal, financed largely with a Federal Transit Administration grant, takes up half a block in The Strand Historic District and also will include public restrooms and a city bus terminal. It will connect by ramp to Shearn Moody Plaza, 25th Street and Harborside Drive. New construction of such magnitude is rare downtown, particularly in The Strand Historic District, defined by its 19th-century feel and carefully restored buildings occupied by galleries, restaurants, lofts, professional offices and shops.

The port hopes to eventually use the spaces at the new terminal for parking for cruise-ship passengers. But until then, the spaces will be available to the general public in a downtown that has a shortage of places to park.The port in November of 2011 agreed to partner with the city in building the transportation terminal after outbidding Mitchell Historic Properties for the neighboring Shearn Moody Garage, which the city owned. The port bid about $3 million for the parking garage where it had a long-term lease and charged downtown office workers and others to park. Port employees, other tenants atShearn Moody Plaza and the public all use the 330-space Shearn Moody garage.

The port also agreed to bring the Shearn Moody Garage up to code at the cost of about $1 million. The city will lease the transportation center from the port for 40 years.

On Monday, the Wharves Board of Trustees, which governs the port, agreed at its regular monthly meeting to exercise the option to assume the lease for the Shearn Moody Parking Garage on Dec. 1. The port hopes to have the parking spaces in the transit terminal available by Dickens on The Strand, a yearly Victorian festival that lures hundreds of people downtown. Dickens on The Strand is Dec. 4-6.

Eventually the port would like cruise-ship passengers to be able to park in the Shearn Moody Garage, enter the walkway and take an elevator down to the baggage area of the cruise ship terminal. But such improvements would cost about $1 million and aren’t currently in the port’s budget.

Port officials had hoped to open the transit terminal in November last year. But construction was halted by a lawsuit brought in 2013 by an island businessman who claimed work on the terminal damaged the foundation of his historic 1898 James Fadden Building at 2410 Strand. In late April last year, the lawsuit was settled with the businessman, Allen Flores, who agreed to sell the historic building, in which he had operated a restaurant and a nightclub, to the publicly owned port and contractor Turner Construction, which won the bid to build the terminal.

The transit terminal got off to a rocky start. Some terminal opponents argued the modern design didn’t blend well with the historic buildings downtown. After much debate and several revisions, Houston firm Powers Brown Architecture in July 2011 won approval for the controversial modern design of the center.

The port will be responsible for managing and keeping the transit terminal clean.

Construction crews are awaiting perforated panels to complete the job. Those panels likely won’t arrive until mid-October and will take about a month to install, Mierzwa said.