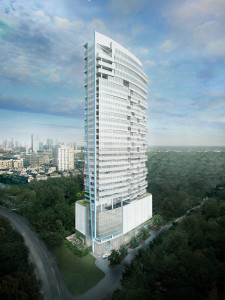 Randall Davis Co. plans to break ground this fall on a new high-rise condominium, which is seeing brisk sales despite the oil slump.

The Houston developer and its development partner, DC Partners, expect to start construction in mid-October on Arabella, a 33-story, 99-unit condo tower at 4521 San Felipe. The condominium project, which will feature 10 units with private terrace-top swimming pools, is planned for the former site of Westcreek at River Oaks apartments near Westheimer Road and the 610 Loop in the Galleria area.

Buyers have purchased about 45 percent of the condo units inside Arabella since Randall Davis Co. began presales in April. The project — which will be built near the River Oaks District, a high-end retail development from San Diego-based OliverMcMillan — is expected to be completed in January 2018.

“Our sales have been really good,” Randall Davis said. “Our location is A+ with the River Oaks District and the iPic movie theater getting ready to open next month. People are attracted to the building.”

Arabella, which was designed by Houston-based Powers Brown Architecture, will feature 10-foot-tall sections of fritted glass windows — the bottom two feet of which will be spotted with white dots — that will give the building the appearance of floating white clouds, Davis said. It’s a design cue borrowed from some of renowned architect Frank Gehry and Richard Meier’s high-rise projects in New York City, he added.

The base of Arabella will look like a jewel box, similar to the new Baccarat Hotel in New York City, Davis said. The podium-style tower will have parking on the bottom floors, an amenity deck on the eighth floor and residences starting on the ninth floor.

Arabella will offer 99 units ranging in size from 1,400 square feet to 5,800 square feet and in price from $800,000 to $4 million. The units will feature European cabinets, high-end Miele appliances and a range of customizable options for wood floors, stone finishes and carpeting.

Building amenities include an outdoor pool and an indoor heated lap pool, fitness center, residents room, catering kitchen, a wine cellar with lockers for residents’ wines and a massage room, sauna and steam room. There also will be 24-hour concierge service, valet parking and two guest apartments, which residents’ visitors can use for a daily fee.

In addition to Arabella, Davis and development partner Roberto Contreras are working together on the Astoria, a 28-story, 74-unit condominium project in the Galleria area, as well as Marlowe, a 20-story, 100-unit condominium tower in downtown Houston.