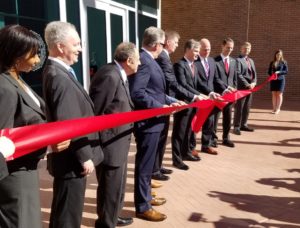 Also in attendance were numerous local, state, and other federal law enforcement executives and their command staff.

“This new building, along with its associated technology and extremely thought out design, will serve as the backdrop for the critical contribution of the FBI Atlanta Field Office as it carries out its many important missions throughout the State of Georgia and beyond’, said David J. LeValley, special agent in charge, FBI Atlanta Field Office. “We have ensured that not only is the requisite technology in place but we’ve also provided for the Georgia Bureau of Investigation (GBI) led Georgia Information Sharing and Analysis Center (GISAC) to remain co-located with us at this facility to ensure that the sharing of information, intelligence, and threat matters remains seamless at all levels of law enforcement within the State of Georgia.” 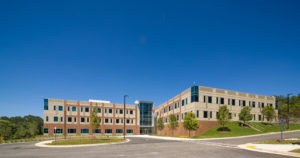 “The Federal Bureau of Investigation’s (FBI) new Atlanta Field Office is a testament to the General Services Administration’s (GSA) mission to deliver the best value in real estate, acquisitions and technology services to government and the American people,” said GSA Acting Administrator Timothy Horne. “The field office will allow the FBI to bring its field operations under one roof at an annual rental rate negotiated to achieve the best value to taxpayers. GSA is pleased to deliver this state-of-the-art, ISC Level IV secured, single tenant facility that will support the FBI in serving the American public for decades to come.”

“This project was a success on many levels,” said Principal Claiborne Williams at FD Stonewater. “Our partnership with the government is extremely valuable when it comes to navigating the Federal Government’s highly-specialized process and requirements, and this is what our team does best. We are proud to deliver a project that will ensure the FBI’s mission-critical functions will be carried out and supported by a best-in-class facility.”

Headquartered in Arlington, Virginia, FD Stonewater is a real estate development, investment, and brokerage firm with national capabilities. In the fall of 2015, FD Stonewater was awarded the contract by GSA for the development of a build-to-suit facility for the FBI in Atlanta, Georgia, with construction commencing in early 2016. Powers Brown Architecture was the lead designer for the project and Harvey Cleary Builders served as general contractor.