Confirmation Bias is a series of letters written by Jeffrey Brown, FAIA during his presidency of the Tilt-Up Concrete Association as a follow up to his talk at the International Tilt-Up Convention and Expo in 2015 titled, “Observations on the Quotidian.”  The letters explore a peculiar relationship between the practicing architectural community, the architectural elite and academia, the construction industry and commercial development realities. They letters were written as if they were part of a prompted dialogue with magazines editor and were construed as a series perhaps described in a tradition of this approach to communication observation, interpretation and advice, from Stravinsky to Rilke, “Letters to an Everyday Architect”. Topics covered are Commodification in architecture, market capitalism as it relates to building form and innovation and the avant garde – mainstream divide in architecture. 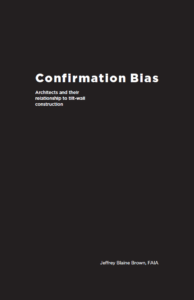