MD Anderson has recently occupied 21,220 SF and 24,875 SF at 9220 and 9230 Kirby, respectively. The existing buildings were originally flex office warehouse buildings and they have been redesigned to accommodate MD Anderson’s needs.

The interior spaces in both buildings have been designed to accommodate numerous tenants within the MD Anderson umbrella. Each tenant has a unique requirement ranging from security of documentation (compliance with HIPAA requirements), to 24 hr work environments and file storage. It was a design requirement that employees occupying the spaces have a sense of equality. Constants between both spaces include double height ceilings along the perimeter walls allowing the clerestory glazing to penetrate deep into the building to maximize natural light. Open office areas are characterized by 11’-0” high ceilings and openings to the exterior glazing.

Numerous collaborative work areas have been dispersed throughout both floor plans as well as communal break rooms and conference rooms for employees to congregate. The utilization of standard MD Anderson colors as a form of way finding was an integral part of the design process, as well as the utilization of the standard developer finishes.

One of the main aspects of the design was the integration of MD Anderson security, data – communication, and computer networking to the main MD Anderson Hub located several miles away. Each building had its own IDF (Intermediate Distribution Frame) and MDF (Main Distribution Frame) rooms and electrical rooms. With a set time frame to allow the move of the tenants from the main MD Anderson facility to the new space, all items from coordination of FFE to occupancy were completed on time. 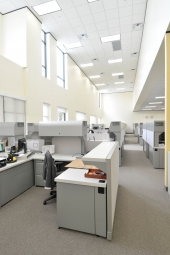 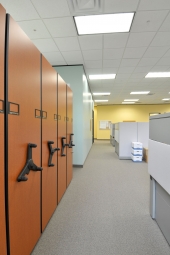