The Thompson Hotel is a vertically integrated mixed-use development including Luxury hotel facilities, on-site parking, chef-driven Riverwalk restaurant, 65 residential units and sky-bar at the topmost level (20th floor) with a view towards downtown.

We conceived of the building as a base that could extend the urban logic of the context with a complex constellation of volumes and planes resting on it composing the tower. The entire ensemble negotiates the opportunities of urban locality and the obligation to the skyline a 20-story building in downtown San Antonio has.
Given the extreme site constraints, the tower was forced into the most formidable urban trope; the slab. Our approach was to articulate the program elements of condo, public spaces and the hotels sub components to deconstruct the slab using formal “cleaving” operations. Cleaving is both a separation and a holding together of things simultaneously.

The first cleaving of the slab is a vertical sliding of both “halves” of the double loaded corridor north and south to the limitation of the base creating empty corners which we occupied with sloped conical volumes. One expanding downward to the street locating the entry of private condo owners the second along the river front rising from bottom to top towards the urban core views. The second cleaving is a horizontal zoning of the hotel on the lower floors from the condo units on the upper floors by separating them physically at the top level of the hotel program of the special suite units that was at exactly mid tower. This facilitates a successful sense of wholeness at numerous scales without sacrificing its overall place on the skyline. 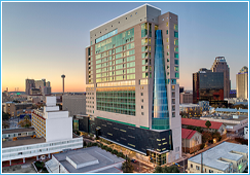 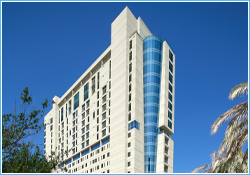 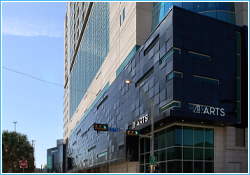 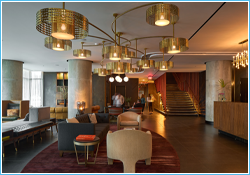 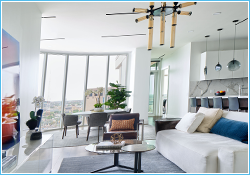